What is the Fed Doing to Ease the Stress of Stress Testing?

On April 10, 2018, the Federal Reserve Board sought comment on a proposal to simplify capital rules for banks while preserving strong capital levels to maintain their ability to lend under stressful conditions. The proposal would reduce the amount of Tier-1 capital that large, medium and small-sized banks would need to hold as a buffer against future economic shocks – based on size, complexity, and systemic footprint of each firm. This should help small and mid-sized financial institutions and non-GSIB (Global Systemically Important Bank) banks free-up capital.

Additionally, lenders would no longer be required to set aside capital to pay dividends while they weather severe economic headwinds, and will see a dramatic reduction in paperwork while increasing transparency and ease-of-monitoring.

This proposal reflects the Trump administration’s desire to unwind regulatory excess in the financial sector and free-up capital for more productive use, while maintaining enough safeguards to prevent future banking crises.

Stress testing assesses whether financial institutions have enough capital to a) survive adverse economic or financial conditions, and b) continue to make loans to creditworthy businesses and consumers. Its goal is to prevent a credit crunch through economic downturns and avoid a banking collapse. Stress testing, purportedly, makes the Federal Reserve Board’s (FRB) capital regime more forward-looking and risk-sensitive, but it comes at a huge cost to banks, with a disproportionate burden borne by small and medium financial institutions.

Under current regulations, financial institutions must conduct annual Stress Tests to determine the amount of capital they must hold to survive an economic shock and continue lending activity. While the concept of stress testing makes sense in the aftermath of the financial meltdown of 2007, the banking sector believes regulators went too far, and created rules that were too complex, too time consuming and too burdensome to implement, especially for small and mid-sized banks.

The Federal Reserve’s proposal would streamline existing rules to: 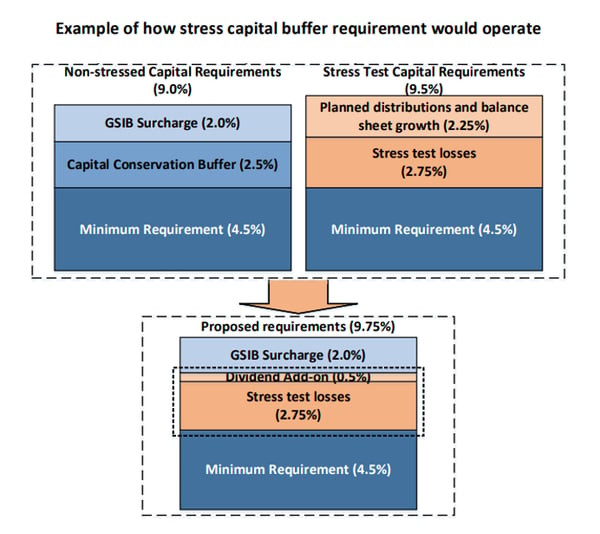 The net impact of the proposal would be a $10 billion to $45 billion decrease in the required level of Common Equity Tier 1 (CET1) capital for most non-GSIBs, and a $10 billion to $50 billion increase in CET1 capital for GSIBs. The proposal clearly works in favor of small, medium and large non-GSIB banks, but will do little to ease the burden of regulatory compliance for most of Wall Street’s largest firms. While the proposal falls short on easing regulations for all banks, it will provide much needed relief to small and medium financial institutions such as regional banks and credit unions.